Arwyn studied ceramics at Loughborough college of art and design under Dave Scott, graduating in June 1995. During his second year he worked with David and Margaret Frith for 2 weeks a memorable and inspiring experience that opened his eyes to the possibilities of becoming a potter.

After graduating he was lucky enough to get the technicians job on the course he'd just finished and stayed for a year, again a great experience. He moved to Carmarthen in September 1996 to work as a thrower at Gwili pottery. He stayed for a year before moving to Frome where after a brief trip to Zimbabwe he was spurred into starting his own workshop in March 1998.

He works in what may be considered a traditional way, using the wheel to produce sound functional forms. The utilitarian wares of Spain and Portugal, and the deep and subtle glaze finishes achieved in the Far East form the backbone of his inspiration. He endeavours to create pieces with simplicity emanating primarily from function, and an elegance that is clearly derived from the Orient. His overriding intention is for the resulting wares to be undeniably functional and a pleasure to use.

All pieces are microwave, oven and dishwasher safe. 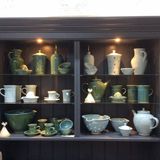